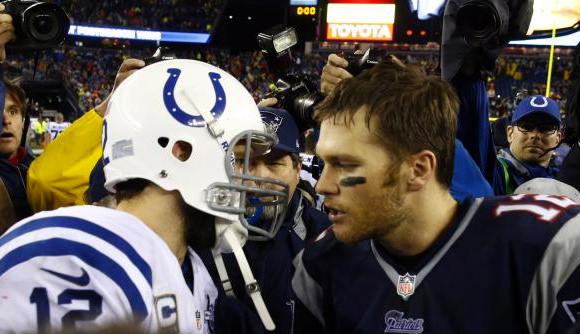 One of the most anticipated games of the season will be played this week, when a rematch of the AFC Championship take place at Indianapolis, while the Chargers will visit the legendary Lambeau Field.

Colts fans have waited a year to avenge the defeat of the AFC Championship and for booing their opponents by the famous deflategate story. Quarterback Tom Brady will be in their second game of the season and will try to beat Indianapolis for the seventh consecutive time. The last defeat of the Patriots in the series was in 2009 when they fell 35-34 at Lucas Oil Dome with a touchdown pass from Peyton Manning to Reggie Wayne with 13 seconds left on the clock.
The series is in favor of New England with 50 wins in 79 games, however, for this game Indianapolis is favorite by -1 in the NFL Odds. The team led by Bill Belichick is 5-0 SU and 4-1 ATS in the last five against the Colts.

Player to watch: All eyes will be on Tom Brady, but the famous number 12 is used to pressure and could maintain their domain against Chuck Pagano’s team. In the last six games of the series, Brady has thrown 12 touchdowns and only three interceptions.

The Chargers will be in the Frozen Tundra for the first time in the last eight years and will try to get the second victory of his history against the Packers. The Cheeseheads leads the series with nine wins and only one defeat. San Diego’s only victory was in 1984 on the road with three touchdowns and 376 yards by quarterback Dan Fouts. For this game, Green Bay is favorite by -5.5 NFL betting odds and in the last five games versus the Bolts is 5-0 SU and 5-0 ATS.

Player to watch: It will be the second game of quarterback Aaron Rodgers against the Chargers and four years ago he threw for 247 yards and four touchdowns in Qualcomm Stadium. San Diego’s defense has allowed 17 touchdown passes and just three interceptions in the last five to Green Bay.

These teams will meet for only the second time since they played in Super Bowl XLVIII, where a spectacular catch by wide receiver Santonio Holmes ended the hopes of the Red Birds to win the Lombardi Trophy. The last game between these teams was four years ago in the desert, and the Steelers took the victory by 32-20 with three touchdown passes from quarterback Ben Roethlisberger. Pittsburgh dominates the series with 33 wins in 59 meetings and has won four of the last five. Mike Tomlin’s team is favorite in the NFL betting lines with -2.5 to win this NFL week 6 matchup and in the last five games of the series it is at 4-1 SU and 3-2 ATS.

Player to watch: Wide receiver Antonio Brown was the leader of the league last season with 1,698 yards, but in this game he will have the difficult task of overcoming cornerback Patrick Peterson, who has been elected four straight years to the Pro Bowl.

The 49ers will try to end their losing streak to the purple birds when they receive them at the Bay for the first time since 2011. The team of Jim Tomsula has four consecutive defeats in the series and its only victory in was 19 years ago. It will be the first time these teams meet since they did it in the Super Bowl XLVII, where the Ravens won 34-31. San Francisco is favorite in the NFL betting Odds listed -2.0. In the past five games against Baltimore, the 49ers are 1-4 SU and 2-3 with ATS.

Player to watch: Wide receiver Anquan Boldin will for the first time against his former team. Last season, he caught 83 passes for 1,062 yards and five touchdowns. The Ravens’ pass defense was No. 23 in the league in 2014, accepting an average of 248.7 yards per game. Atlanta Falcons-New Orleans Saints (-3.5), Carolina Panthers-Seattle Seahawks (-8), Chicago Bears-Detroit Lions (-5.0) and New York Giants-Philadelphia Eagles (4-0) are other interesting games in this week.

Visit NflScheduleWeek6.com for the NFL week 6 game previews, and recaps with the best of the 2015 NFL season.